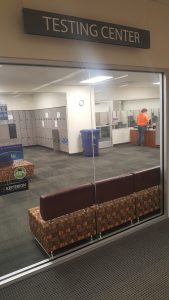 People came from near and far to take these tests. The Testing Center had test takers drive from as far away as Mississippi, Kansas, Arkansas, Oklahoma, and Illinois. One student flew in from Cleveland. The MSU Testing Center was the only HISET testing center for the state of the Missouri for most of the summer, and one of the very few testing centers open for other national test vendors, such as Pearson.

Just for comparison, during the Spring 2016 semester, which was the second full semester the MSU Testing Center was open as a consolidated service in the Lower Level of Duane G. Meyer Library, the Testing Center handled “only” 1,454 exams for the entire sixteen-week semester, including large group exams such as the ACT and SAT.

In response to this growth in demand for testing services, the MSU Libraries is in the process of reorganizing two existing staff positions into two Administrative Specialist II positions in the MSU Testing Center. The goal is to fill those two positions by October 1. Sue McCrory is the chair of the search committee for those two positions.