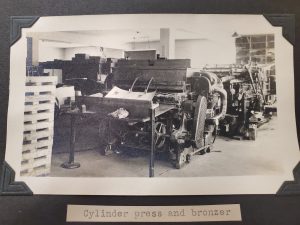 In May 2020 Richard Crabtree, a local realtor and historian, donated to the Missouri State University Libraries a booklet of old photos of the printing plant where Big Chief Tablets were made.

Just about every child in Southwest Missouri in the twentieth century remembers Big Chief writing tablets. The famous tablet was initially developed in 1906 by the Western Tablet Company in St. Joseph, Missouri, owned by William Albrecht. The company eventually became the largest paper tablet producer in the world. Sales of Big Chief Tablets peaked in the Sixties. In 1966 the company was sold to Mead. Then Mead sold the Big Chief line of tablets to Springfield Tablet Company. 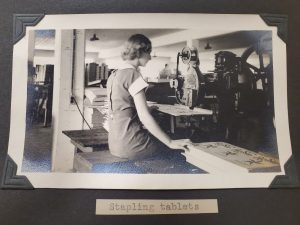 The historic photos were given to Richard Crabtree by Harry Chalfant, grandson of Harry Jewell. The MSU Libraries plans to digitize the photos and make them freely available online to students, researchers, and members of the general public.