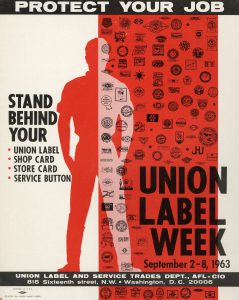 The Essie DeCamp Collection (LA 3) in Meyer Library’s Special Collections and Archives contains the papers of DeCamp, who was a founding member in 1936 of the women’s auxiliary to the Amalgamated Association of Street Electric Railway Employees of America, Local 691.  She was also a founding member of the Joint Council of Women’s Auxiliaries and was very active in the Label League.  This collection includes records of these organizations as well as some personal papers.

The first official meeting of Local 691’s women’s auxiliary was held in January of 1937, although the local was not chartered until 1938 when the international auxiliary was formed.  Membership of the auxiliary grew quickly.  Before World War II, the auxiliary gave dinners and luncheons for members of the union, and spent time studying the origins of labor unions and ways women could help, and in welfare and service projects.

During World War II, the auxiliary kept busy serving the needs of O’Reilly hospital in Springfield.  Members served as nurse aides and “gray ladies,” rolling bandages and making pads and lap robes for patients.  In 1944, the International Auxiliary sponsored a fund raising program to raise money to buy at least one ambulance for the War Department for use overseas.  Local 691 Auxiliary at that time had 22 members, and raised the most money per capita.  They were given the honor of presenting two ambulances to the War Department on behalf of the International Auxiliary.  The money raised by the auxiliaries was more than enough to buy two ambulances, and excess funds were used to buy needed equipment for O’Reilly Hospital.

After the War, union membership increased as men returned to work from armed service.  Local 691 and its auxiliary was no exception.  The 1950s saw the heyday of membership.  During the ‘60s, however, membership declined.  In 1970, the Auxiliary disbanded.  Essie DeCamp was still a member at that time.  She had served as its president for four or five years, and as secretary for “more years than I remember.”

The Joint Council of Women’s Auxiliaries was organized on May 28th, 1947, following the Missouri State Federation of Labor Convention.  DeCamp was elected president of the organization. The Joint Council worked to organize auxiliaries in the area, and succeeded in organizing auxiliaries to the Hod-carriers and Laborers (the first auxiliary to this union in the U.S.), Bakers, Grain Millers, Electricians, and Plumbers among others.  The Council also worked to help educate the wives of union members about ways they could help labor.  They sponsored meetings of the Missouri State Federation of Women’s Auxiliaries when they were held in Springfield.

DeCamp was the daughter of J. R. (Bob) Andrews, an early Springfield labor leader and founding member of the Amalgamated Association of Street and Electric Railway and Motor Coach Employees of America (Local 691) in 1916.  That same year, the Local went on strike against Springfield Traction Company.  The strike lasted 252 days, but the workers won the right to organize and to bargain collectively.  The union had the strong support of city leaders and citizenry, and the strike led the way for other street car workers in Missouri to organize.  Bob Andrews was active in the strike and was a union representative in negotiations at the end of the strike.

Essie DeCamp later married L. G. (Pat) DeCamp, who was also a member of Local 691.  He went to work as a track welder for Springfield Traction, while Essie’s father was a track foreman.  Mr. DeCamp served as an officer in the union for several years.