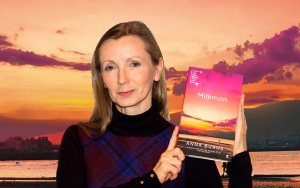 On Tuesday officials of the Man Booker Prize announced this year’s winner from the six books (and authors) that had been “shortlisted” as the finalists:

The winner is: Milkman!

This international literary prize is open to any writer of any nationality who is writing in English and whose book is published in the UK and Ireland. Prize is 50,000 pounds sterling.