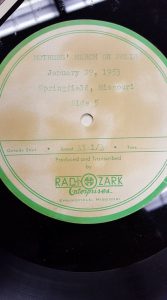 In January 2018, thanks to the perspicacity and generosity of Wayne Glenn, The Old Record Collector, whose weekly radio program appears on KTXR, and the hard work of Randy Stewart from KSMU Radio (and spouse of our own Tammy Stewart), the MSU Libraries received a donation of digitized copies of several old RadiOzark transcriptions (that is, LP recordings) of radio programs from the Fifties.

They complement our efforts to have old kinescopes of the Ozark Jubilee digitized and made freely available online.