Last Thursday evening the Ozark Jubilee Digitization Project was officially launched by a public event held at the University Plaza Hotel, in conjunction with the Missouri Conference on History, organized by the State Historical Socie 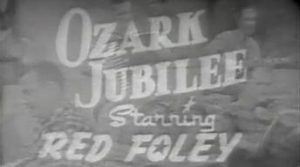 ty of Missouri. Over sixty people attended the event, which lasted over an hour longer than anticipated, because audience members had so many questions to ask and memories to share. Last Thursday also was the launch of the YouTube Channel for these amazing recordings of live, nationally broadcast television broadcasts emanating primarily from the Jewell Theater in downtown Springfield. One 30-minute episode (June 16, 1955) already is online (and has received over 60 views already). On Monday the UCLA Film and Television Archive notified the MSU Libraries that nine more episodes have been digitized and are ready to be uploaded. Keep Watching the Ozark Jubilee!