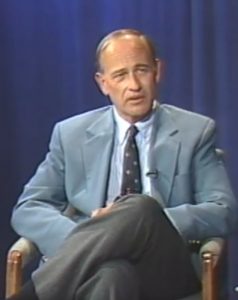 We were sorry to learn of the death of Dr. Ralph R. Smith, faculty emeritus, Department of Communication, Missouri State University. Among Dr. Smith’s (1944-2022) accomplishments is one that is particularly pertinent to the MSU Libraries: Dr. Smith helped found the first gay archives in the Ozarks region.

In 2003 Dr. Smith and Dr. Holly Baggett (Professor, History department) approached the MSU Libraries about starting an LGBTQ+ archive for the Ozarks region. Their goal was to build a collection of materials to document the history and culture of a community that was largely unknown.

Through their efforts and with the support of the MSU Libraries’ administration, the Ozarks Lesbian and Gay Archives (OLGA) was officially opened on October 30, 2003. Through the years OLGA has grown to include records of local organizations, scrapbooks on local events, photographs, and a myriad of other materials.  In 2004 the oral history program began. Over the years, 200 people have shared their stories about the LGBTQ+ experience in the area.

Dr. Smith’s health declined, and he has not been active with OLGA for several years. In the early years, though, he was a staunch supporter of OLGA, reaching out to the community to raise awareness of the project. Among the collections now in OLGA is a local television program called This Gay Life. An episode from 1994 featured Dr. Smith speaking on “Gay History.”