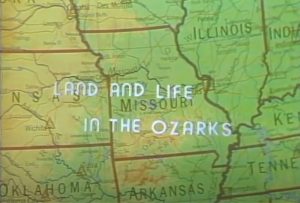 Special Collections and University Archives, part of the Missouri State University Libraries, is pleased to make available fourteen episodes of “Land and Life in the Ozarks.” This pioneering telecourse was offered by then–SMSU on KOZK Channel 21 (now Ozarks Public Television) where it premiered in January 1976.

The course was taught by Dr. Milton Rafferty, who was Department Head of Geography, Geology and Planning at SMSU for 24 years. Rafferty developed the course as a first draft for his 1980 work Ozarks Land and Life, which has since been described as the quintessential book on the region. He was added to the MSU Wall of Fame in 2009.

Topics covered in the series include settlement of the Ozarks, agricultural systems, recreation and tourism, and the cultural landscape of the Ozarks. The episodes can be found on the MSU Libraries YouTube channel.  If you have questions, please contact Special Collections and Archives.