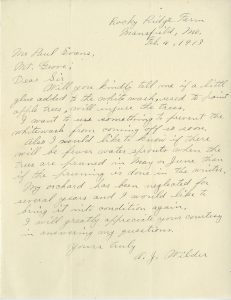 The MSU Libraries, including the Ozarks Studies Institute, has an enduring commitment to collecting works and other information by and about Ozarks authors, past, present, and future. We make these works and documents available to researchers and members of the general public, and we celebrate Ozark authors through author talks, book signings, and other events.

Recently the MSU Libraries discovered some correspondence between Almanzo Wilder, husband of the famed author who spent almost her entire adult life in the Ozarks, primarily at Rocky Ridge Farm east of Mansfield, Laura Ingalls Wilder.

The letter, dated February 4, 1913, and in Laura’s hand, asked Paul Evans at the Fruit Experimentation Station in Mountain Grove, Missouri, for his advice regarding adding some glue to the whitewash used to paint fruit trees to keep the whitewash from washing off so soon. The whitewash was applied to protect the trees from deer and other pests.

In his typed response, dated February 6, 1913, Director Evans noted that, although adding glue to the whitewash would do no harm, it probably would do little good, either. Evan recommended emulsifying a little crude oil into the whitewash.

The Wilders grew apple trees and other fruit trees on Rocky Ridge Farm, and Laura was well known in Missouri for her expertise with laying hens.