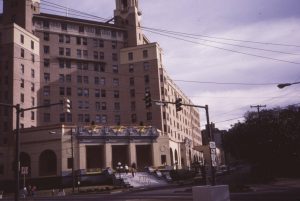 Dr. Milton D. Rafferty, a native of Kansas, was a professor of Geology at Missouri State University until retiring in 1997.  During his time at Missouri State, he served as head of the Geosciences Department and was also instrumental in establishing the Center for Ozarks Studies in 1976.  He first began his career as an author in 1966, before he finished his doctoral dissertation in 1970.  Dr. Rafferty has authored several books, many of which relate to the Ozarks region.

The Rafferty Slide Collection (M 9) in Meyer Library’s Special Collections and Archives contains slides taken by Dr. Rafferty circa the 1960s-1980s on various vacations and trips around the country and around the world.  The images, which total approximately 7,000 or more, represent a wide variety of topics, such as buildings, signs and advertisements, land formations, religious institutions, music events, wineries, amusement parks, and machinery, and were taken in locations such as the Ozarks, many places across the United States, China, the former Soviet Union, and the Amazon rainforest.  These are all currently being digitized, and a portion of this collection is already available in our online Digital Collections.