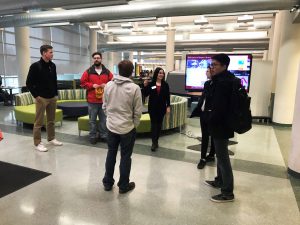 The Research and Instructional Services (RIS) Unit of the Missouri State University Libraries conducted several tours during the first two weeks of the semester,  and during the week prior to the start of spring semester.  During the first two weeks of the semester, RIS conducted one tour each day (excluding Monday, Jan. 15).  These tours were drop-in only with no appointment necessary and were provided during a variety of times in order to accommodate as many student schedules as possible. Two impromptu tours were provided to students asking for additional tour times. Tours were listed on the university calendar and announced through the Libraries’ Facebook and Twitter feed.  We also were asked to conduct four tours the week prior to spring semester for the prospective Doctor of Nurse Anesthesia students. Students learned about spaces, services, and collections within Meyer Library. Many were upper level, returning students who made several positive comments about the new furniture. The prospective students seemed most impressed by the standing and walking desk options for studying as well as intrigued by our virtual reality services. For the spring semester, RIS had a total of 74 students tour the building.