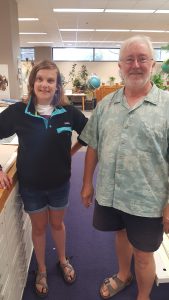 Jim Coombs, the Maps and GIS Librarian at the Missouri State University Libraries, and GIS Student Assistant Emilie Burke, designed several specific, detailed maps that will appear in September in a new book written by J. Blake Perkins, Hillbilly Hellraisers: Federal Power and Populist Defiance in the Ozarks (University of Illinois Press). One of the maps, Arkansas Physiographic Regions, used boundaries of the Ozark Plateau, Arkansas River Valley, and Ouachita Mountains established by the Arkansas Geological Survey. Another map, Railroads in the Arkansas Ozarks, 1920, shows the routes of the Combs, Cass & Eastern, Kansas City Southern, Missouri Northern Arkansas, Missouri Pacific, and St. Louis & San Francisco railroads.  Other maps include U.S. Army Corps of Engineers Lakes in the Arkansas Ozarks and Counties in the Ozarks Regional Commission Development Area. These maps were created with Adobe Illustrator using base maps from various sources, as part of our Maps & GIS Unit’s Geographic Information Services.

Professor Perkins will give a free, public lecture about his new book on Monday, Oct. 23 beginning at 6:30 p.m. in Room 101 of Duane G. Meyer Library, just off the main lobby.