On April 3rd the MSU Libraries applied for a $5,105 grant from the Route 66 Corridor Preservation Program of the National Park Service. We proposed to conduct, in collaboration with Ozarks Alive, at least 20 oral history interviews with individuals involved in and/or knowledgeable of the history of the trucking industry along the Route 66 Corridor in Missouri from 1926 to 1985. For example, Campbell 66 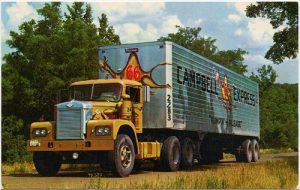 Express, a trucking firm based in Springfield, Missouri, was founded in 1926, the same year as Route 66, and filed for bankruptcy in 1986, one year after Route 66 was officially removed from the U.S. Highway System. The impact of commercial trucking along the Route 66 Corridor in Missouri was significant, but has not received much attention to date, compared to recreational travel by family and friends. If funded, the oral history work, matched with in-kind contributions from the MSU Libraries, will be done between October 2017 and August 2018.