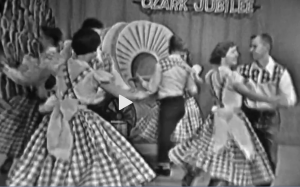 To commemorate the completion of its multi-year Ozark Jubilee Digitization Project, the Missouri State University Libraries invites you to a free and open-to-the-public reception on Thursday, April 21 from 4-6 p.m. The event will be held in the Ozarks Room (302) of the Duane G. Meyer Library on the main Springfield Campus.
The celebration will feature displays and digitized footage of Ozark Jubilee, as well as remarks from lead contributors on the project: Dean of Library Services Tom Peters and “The Old Record Collector” Wayne Glenn. Ozarks-inspired refreshments will be served.
Ozark Jubilee was a live, weekly, nationally-broadcast television show that originated from the Jewell Theater in Springfield from January 1955 to September 1960. The show bolstered the region’s music scene and launched the careers of many country music stars, including Brenda Lee and Porter Wagoner.
The MSU Libraries’ digitization project began several years ago, when Wayne Glenn approached Tom Peters about a large collection of approximately 65 Ozark Jubilee kinescopes at the UCLA Film and Television Archive. After some negotiations, UCLA agreed to digitize their kinescopes and send copies of the kinescopes to the MSU Libraries, where they were lightly edited, enhanced with metadata, and made available free online to the general public.
Comments are closed.