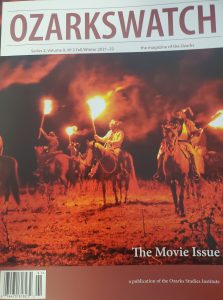 A new issue of the popular general periodical called OzarksWatch Magazine has been published. It explores the depiction of the Ozarks over the years in motion pictures.

Articles in this issue focus on

This issue includes other articles, book reviews, and appreciation of Bob Flanders, who help found the magazine and recently passed.

Two issues of OzarksWatch Magazine are published per year. An annual subscription costs $16, and single issues are $10 each.

The next issue will explore the general theme of foraging in the Ozarks.