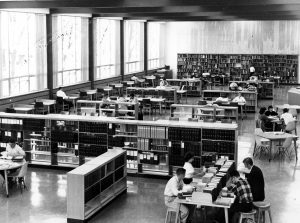 The Library Services Record Group (RG 3/6) in Meyer Library’s Special Collections and Archives represents the history of library services at Missouri State University, including photographs, meeting minutes, financial records, reports, and more, dating back to the 1919.

The library began with 600 volumes in 1905 as a part of the Missouri State Normal School #4.  It moved into the north wing of the new academic building (Carrington Hall) in 1909 and by 1912 its collection had grown to 12,000 volumes.  An article in the Southwest Standard praised the library’s service but lamented that it still needed more books.

By 1924 the library work force consisted of two librarians, one staff and 22 student assistants.  In 1940 the library contained 50,000 volumes and employed five librarians, 20 student assistants and 20 National Youth Administration students. The next year plans were drawn for a $128,000 art-deco style library to be built through the Works Progress Administration (W.P.A.).  To the disappointment of the campus community, World War II halted the project before it received W.P.A. approval.  Finally, construction began in 1954 on a $600,000 library building, designed to hold 150,000 volumes, provide seating for 2,400, and include a foreign language lab and faculty reading room.  The new Memorial Library (later Cheek Hall) had an air-conditioned first floor and was dedicated in November of 1955.

In 1960 staff included six professional librarians and approximately 30 student assistants.  That same year the library became a United States Government Document Depository. By 1975 the library collection had grown to 270,000 volumes and 207,000 microform units.  By this time, library personnel included 15 librarians and 17 staff and the status and name of the college had changed to university.

In 1978 $6.8 million was allocated for construction, equipment and furnishings for a new library building, which was dedicated in September of 1980. In 1982 the Board of Regents named the library in honor of retiring MSU President Duane G. Meyer.  The library celebrated the acquisition of its 500,000th volume, a facsimile of the Gutenberg Bible, in 1990.  By 1995, the library contained 586,900 volumes and 844,000 microform units.  In 2000 Meyer Library was named as an official United Nations Depository.

As of 2001, the year this collection was processed as well as the year the Meyer Library building was extensively renovated and added onto, the items in MSU’s libraries numbered over 2.9 million including volumes, subscriptions to periodicals and newspapers, extensive back files of journals and newspapers, audiovisual materials, and government documents and maps.