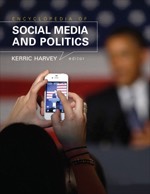 The Encyclopedia of Social Media and Politics is a three-volume, A-to-Z encyclopedia that explores how the rise of social media is altering politics both in the United States and in key moments, movements, and places around the world. Its scope encompasses the disruptive technologies and activities that are changing basic patterns in American politics and the amazing transformations that social media use is rendering in other political systems heretofore resistant to democratization and change. In a time when social media are revolutionizing and galvanizing politics in the United States and around the world, this encyclopedia is a must-have reference. This set also includes 600 short essays on high-interest topics that explore social media’s impact on politics, such as “Activists and Activism,” “Issues and Social Media,” “Politics and Social Media,” and “Popular Uprisings and Protest.”