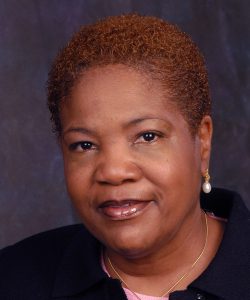 Again in 2018 the Missouri State University Libraries is sponsoring a table at the induction ceremony and dinner for the Missouri Public Affairs Hall of Fame, which will be held Friday evening, April 13th at the White River Conference Center adjacent to Bass Pro and the new Wonders of Wildlife exhibit. Guests at the Libraries’ table will include three deans of the MSU Libraries, their spouses, colleagues, and friends.

The Missouri Public Affairs Hall of Fame honors individuals who through their academic, personal or professional achievements demonstrate active civic engagement to improve the lives of others. New inductees for 2018 include Pete Herschend of Herschend Family Entertainment, which owns Silver Dollar City and dozens of other entertainment venues and groups, Jean Carnahan, the first woman in Missouri history to serve in the U.S. Senate, Phyllis Washington (pictured), an innovative educator and principal from Kansas City, General John J. Pershing, who was selected by President Woodrow Wilson to serve as the commanding officer of the AEF when the United States entered World War I, and Lane McConnell, who in 2011 founded the Farmers Market of the Ozarks (FMO) in Springfield with local developer Matt O’Reilly.