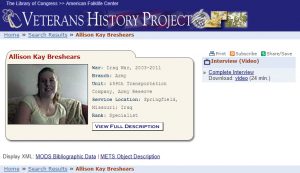 The Harry E. Appleby Veterans Oral History Project (M 13) in Special Collections and Archives is a collection of interviews with U.S. veterans and a part of the Veterans History Project of the Library of Congress.  This nationwide project preserves the memories of men and women who served in the U.S. military.  In addition, local interviewers have also spoken with some non-veterans about their experiences during wartime.

Missouri State University’s Staff Senate Veterans Recognition Committee, the Springfield-Greene County Public Library, and local VFW chapters have also participated in the project.  The interviews are conducted by volunteers, including many students from MSU classes, using a list of suggested interview questions from the Library of Congress.

The project is named after Harry E. Appleby, who spoke with Dr. Julie Johnson’s class about his experiences in World War II.  By sharing his personal memories of the Normandy Landing and the Battle of the Bulge, Mr. Appleby inspired local participation in the Veterans History Project.

Many of the interviews have been digitized and are available online through the Library of Congress.